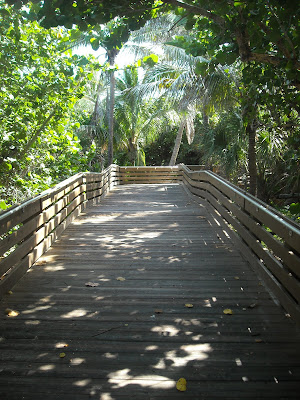 I decided to venture over to the beach that I live only 2 miles from! Sad but true. We rarely go, but I want to make a commitment to go at least once a week and have a look around!

I am walking down the boardwalk to get out there... 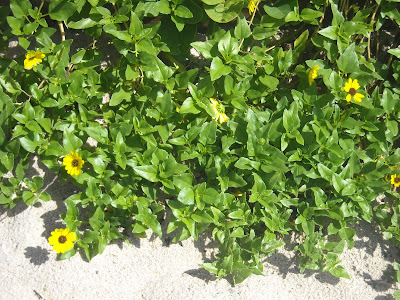 I passed by this Black Eyed Susan-like plant growing there quite nicely...and others were around as well. 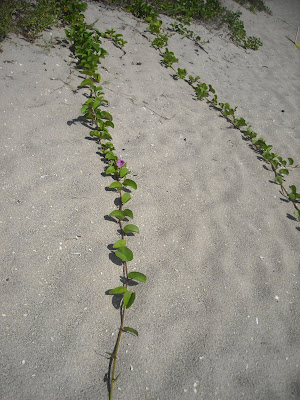 I have no idea what these long runners are above...but below, you can see that they have purple flowers! 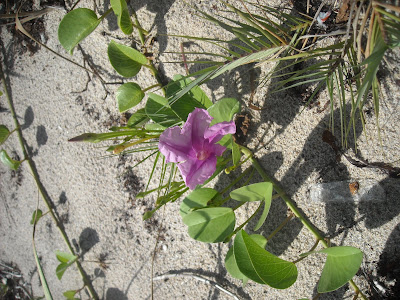 Found some driftwood just laying around...I was thinking about grabbing it and running...but the lifeguards were right there...I would have to come back after dark.....LOLOL! 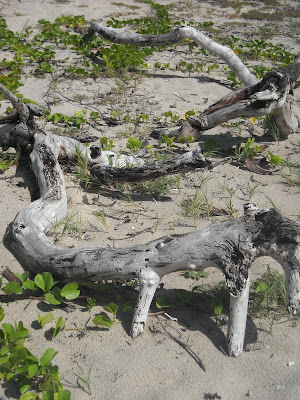 Below is one of the marked Loggerhead sea turtle nests...they are all up and down the beach. The babies will be hatching out in September! 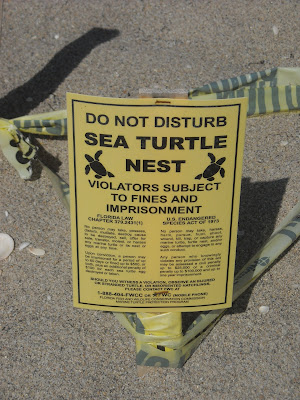 A fastly fleeting sandcastle, complete with shells for decoration! 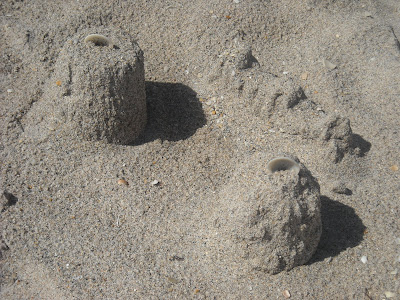 I was wrong in previous posts...there are rocks in Florida! In a later portion of this series of pictures, you will see where most of the rocks are in Florida...and it makes sense when you see it in print! (later). 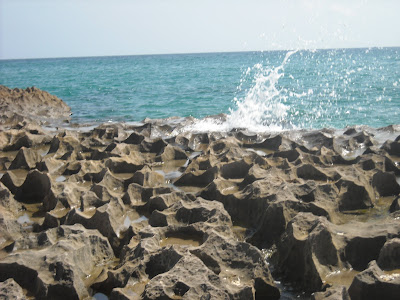 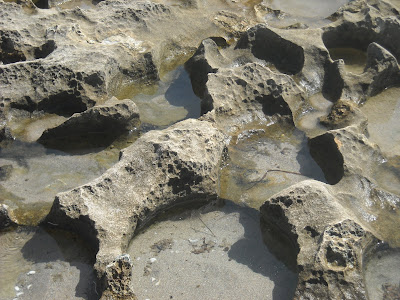 Here is a view to the south...later I will post more views of condos...and I actually found some succulent plants growing straight out of the sand!!! How cool. I also have a dragonfly and a spider for you, that I see as I am leaving the beach! So I will be back either tomorrow or the next day with part 2 of the beach!!! 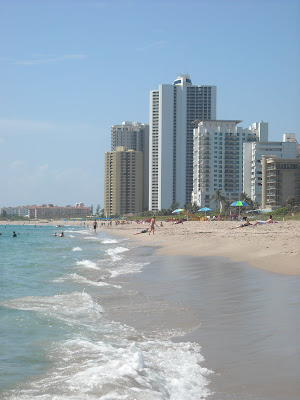 Have a happy weekend!

Wow and you live so close? Great pics.

oh no julie, that is criminal to live so near and not go more. pleeeese go for me at least once a month- pleeeese. i yearn for the smell of the sea in my nostrils.

When I find those rock piles along a beach I always like to look in the water pools to see if there are living things in there. It looks like a fun place to explore.

A day at the beach was just what I needed. Thanks for taking me along. Every photo fascinated me, especially the long plant runners with the purple flowers. Tell us more about the moon rocks.

Thank you for your kind words left on my blog. The coo coo kid starts school on Wednesday. Now that his crazy busy summer is winding down, I hope to get him back to his blog.

Hugs from up north. donna

Oh what a beauteous walk!!! Take your sketchbook with you next time, there is so much to sketch I am salivating!!!
Have a fun weekend Julie.

Wonderful photos and what a clear day!

Oh Julie, What a beautiful beach and all kind of pretty plants around too. I hope you do get out there more and have some relaxing walks. That driftwood would look great as a garden decor. I know the lizards would love hanging out on it. Have a great weekend.
Blessings,

Those pesky lifeguards need to stick to saving lives and leave us beachcombers alone :) The errosion on the rocks does look like the moon - very cool pics.

I love your pics!! The purple flower looks like a vinca? Or variety of it?? We have this plant on our property and it has similiar sprawling abilities along with the purple flower:)

Julie I don't go to the beach either (only when we have company) and I live in Clearwater with a FAMOUS beach. Just not a redhead thing.

Your photos of the plants were great. I bet it was HOT.

I love the succulent in your banner pic!

I keep forgetting to tell you how beautiful your header is! It IS!!!
How lovely to be so short a distance from a beach! Wow. I loved "our walk" and all we saw there, thanks so much for taking me along! I would LOVE To go again!

Don't feel bad, I'd probably do the same thing if I lived that close to the beach...except my girls would drag me there all the time! It's beautiful though and those rocks are neat looking.

I'm wondering if the succulents you found look like the ones I've found in Corpus. I actually smuggled some home one year and put them in sand, but they never made it...must have been the lack of the salt water. Bummer, but I enjoy looking at them when we go.

I live on an island and the beach is close on all sides and I hardly ever go....
Friends from other places don´t understand that.
I love the beach in the spring and winter to walk the dogs.

Beautiful pictures Julie! I bet your beach is lovely in the winter! 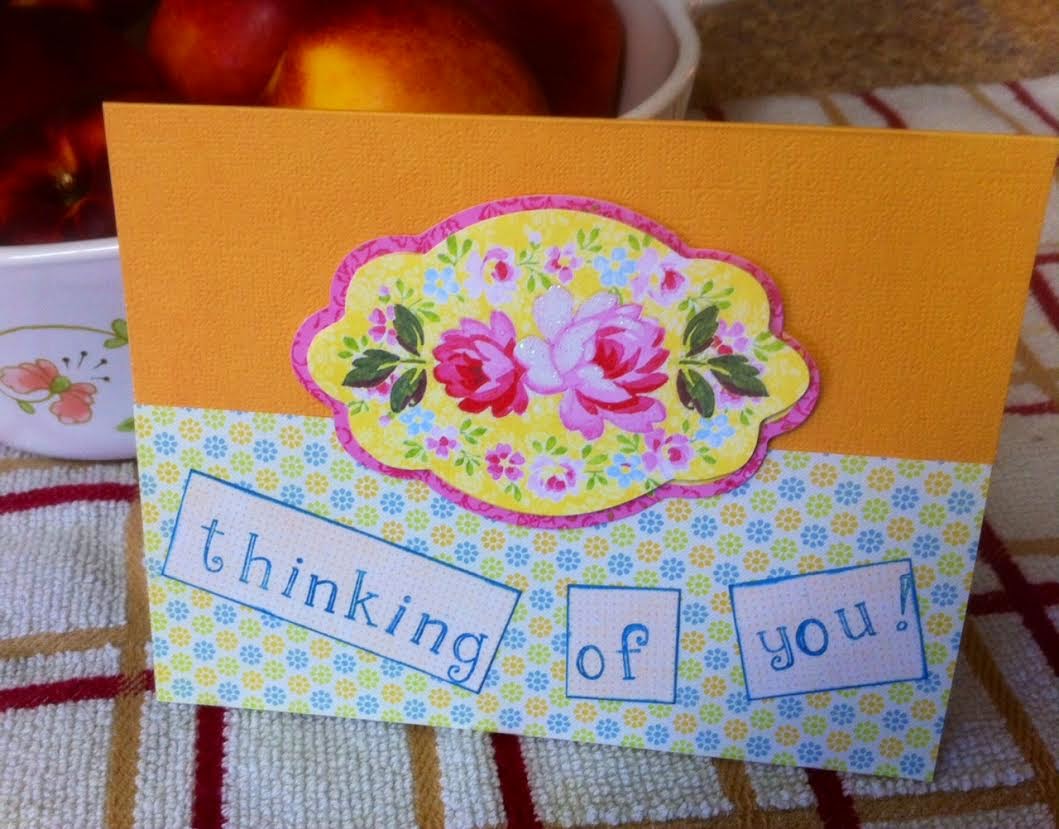 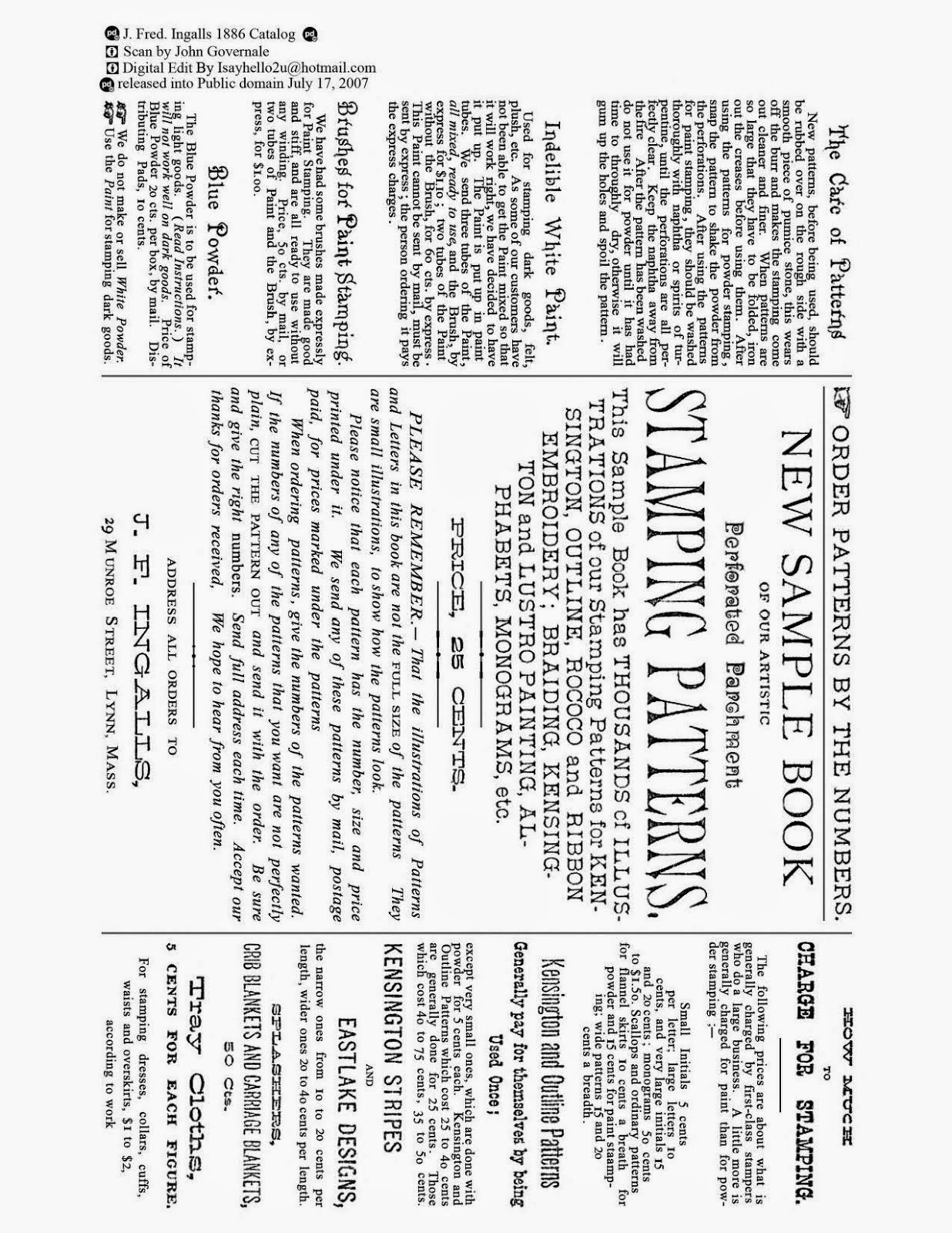 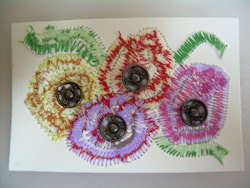